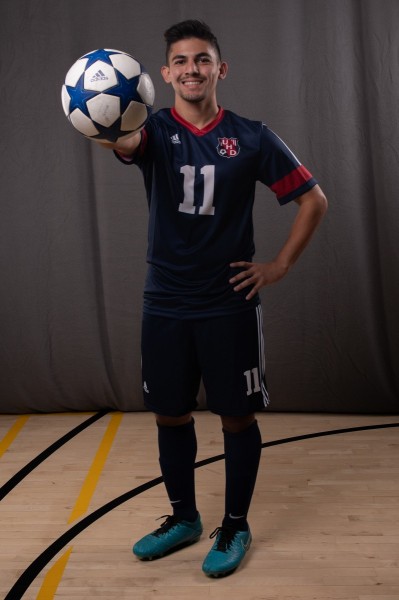 Tonight, a University of Houston-Downtown student plays for all the marbles during the PlayVS FIFA 21 esports tournament.

Student Christian Dominguez will represent the University this evening in the championship round of this virtual competition. UHD’s FIFA esports team is nationally ranked and several players participated in this competition that included university teams from across the country. Now, Dominguez will be in the final round playing for PlayVs FIFA 21 title.

“Honestly this is all new to me,” he said. “It is very exciting and an honor to be representing UHD alongside my friends.”

Dominguez’s success in this tournament (and the success of his teammates) is a reflection of the quick growth of UHD’s Esports Program. Started just three years ago, UHD has grown immensely with teams ascending in the regional and national rankings, including those playing League of Legends and other popular games.

For the FIFA team, however, this evening’s championship round is particularly symbolic of its quick rise in such a short time.

According to the team’s manager and fellow UHD student Ricky Rodriguez, the friendship among its players has bolstered their performance as esports competitors. Likewise, the experience of working together has created a memorable experience for everyone involved.

“One of the best things I’ve done with the team is getting to know each player individually,” Rodriguez said. “When they play FIFA 21, they are part of a team … they have that Gator Spirit. As a fellow student and as team manager, I am proud of Christian and look forward to supporting him tonight.”

For Dominguez, his journey to this moment began with he and friend Christian Castellon dreamt of starting their own FIFA esports team. Now, that dream has come true and he’s poised to represent the university in a major esports event.

We have definitely made a lot of progress compared to the first day it all started and hopefully the team continues to grow and we can compete more and win many competitions for the University in the future,” Dominguez said.