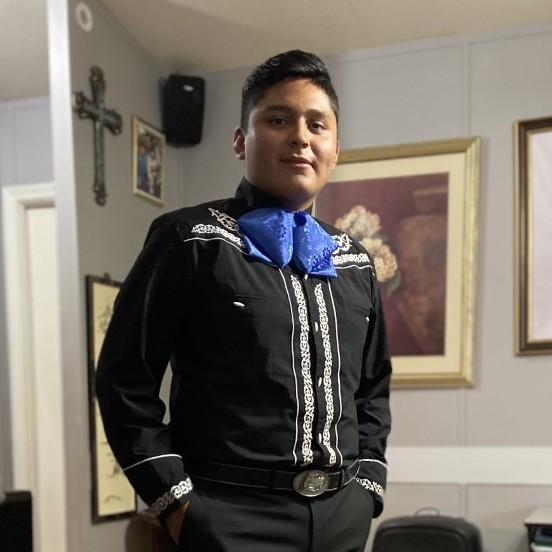 The University of Houston-Downtown’s student mariachi group, Mariachi Los Caimanes, made a big splash when it debuted last fall. After just one year, the group is still making waves on the scene. UHD senior and band member Jimmy Arredondo has been named a finalist in the Mariachi Vargas Extravaganza National Vocal Competition. He is one of 10 contestants and the only Houstonian to place in the college/university division finals.

“Jimmy has a great work ethic, and it did not surprise me one bit that he made it as a finalist. He takes his craft very seriously, and you can always find him looking for ways to improve his vocal technique. He has come a long way in the year I have worked with him. It has been my pleasure to coach him and see him grow,” said José Vázquez, Assistant Director of Student Activities and the group’s Director.

The Mariachi Vargas Extravaganza is the largest and longest-running mariachi music festival in the United States. Judges are members of the world’s preeminent Mariachi Vargas de Tecalitlán, who will select winners based on vocal technique, showmanship and overall performance excellence. The national vocal competition, including the announcement of winners, streams on YouTube Saturday, Dec. 5 at 7 p.m.

Acknowledging Arredondo’s achievement and the impact for the University’s budding group, Vázquez continued, “This is just the first step in the process to becoming recognized as a premier mariachi in the region. In Texas, most award-winning mariachis are from the San Antonio/Rio Grande Valley region. Why not us? Having a vocal finalist will give us instant credibility.”

For the competition, Arredondo submitted a production of Pedro Fernández’ “El Aventurero,” a song performed from the perspective of a philandering rascal with a zest for life. Fernández is four-time Latin Grammy Award-winning ranchera and mariachi singer, actor, songwriter and television host. In his 40-plus years of entertaining, he has released more than three dozen albums and starred in multiple telenovelas and films.

“Pedro Fernández is my idol when it comes to mariachi music. I’m very fond of the style, the way he sings and his dramatic stage presence,” Arredondo said. “There’s so many different aspects of mariachi I enjoy. The one thing I enjoy the most is the dramatization of the music. It causes a swell of emotion. Depending on the singer, the song or the words, it captivates you in a certain way. The beauty of mariachi music is the intensity of the music. You can scale the intensity of the emotions up or down.”

Arredondo's affinity for mariachi started at an early age thanks to his parents’ love of the style, and it continued into his teenage years. Even though his high school did not have a mariachi band, that didn’t stop him from attending a summer camp connected to the Mariachi Vargas Extravaganza. Arredondo was the only attendee from Houston, and it was his introduction to performing. Despite his best attempts, though, the feedback from his camp coaches was that he needed more preparation if he wanted to evolve.

Having grown from years of practice, Arredondo views his placement as a finalist in the extravaganza as a full circle moment.

“Even though I’m very proud that I’m a finalist in this competition, it’s also very humbling. This competition brings the best from around the United States,” he said. “I remember the vocal camp in high school where I was told I wasn’t ready to perform on stage. Then a few years later, I’m being invited by the same group of people to compete as a finalist. It’s mind blowing. I remember where I came from, and now I’m representing UHD at the highest level.”

Arredondo hopes this competition and his performing with Mariachi Los Caimanes can open doors for future performances, but he has goals outside of music as well. When he completes his Bachelor of Science in interdisciplinary studies with a focus in communications, he wants to make his mark in education.

“Currently, I work for YES Prep Southwest, the charter school where I graduated. Right now, I’m working as a special education student aide. I want to continue in the path of teaching and become a principal. My main goal is to bring attention to and fix education equity,” he said.