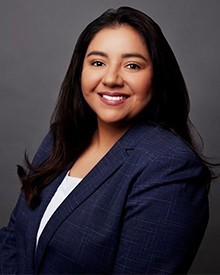 It’s not about the destination. It’s about the journey.

Meet Dr. Lizette Burks. A native West Texan who grew up in Pampa, Texas, just an hour north of Amarillo.

She attended Texas Tech University, where she earned a bachelor’s degree in biology with aspirations to become a doctor. In fact, she studied pre-med.

“I knew I wanted to become a doctor because I loved all things science. My family wanted me to be the first medical ‘doctora’ in the family,” said the daughter of Mexican immigrants.

That road was only a slight detour. Burks realized early on that becoming a physician wasn’t for her. “I would shadow surgeons at 3 or 4 a.m. in the morning,” she said, laughing. “I tried and tried, but the burning tool used to cauterize flesh was too much. I just couldn’t hang with the doctors.”

So, it was suggested that she try a different area of the sciences – the laboratory. After graduation, she worked at Texas Tech University Health Sciences Center to conduct research: “I loved it … running tests and experiments … it felt like home to me,” said the Assistant Professor of Educational Leadership in UHD’s Department of Urban Education.

Early in childhood, Burks and her sister, who spoke only Spanish, were enrolled in Special Education classes because the school didn’t know where to place them. This was the ’80s.

“Because of our experiences, my mother became a bilingual teacher to help our family learn English and build a bilingual program at a school I attended,” she said proudly. “It was truly empowering to see my mother’s advocacy as a teacher who enabled us to navigate education through white culture.” Burks’ mother was an educator for more than 30 years.

Her mother’s passion coupled with Burks’ tutoring experiences led her to a fork in the road – she had to make a choice between the lab and the classroom. “It broke my heart, the thought of choosing between my research position or teaching,” she said. But the right path opened when she was offered an opportunity to support public education initiatives alongside her science professional duties, a role that combined her love of science and teaching.

She went on to earn a Master of Science in Teaching at Emporia State University in Kansas followed by a Doctor of Education in Curriculum & Instruction at the University of Kansas with an emphasis in science education. While earning her Ed.D., Burks served as the Kansas Department of Education’s State Science Content Supervisor. In 2016, she led the statewide implementation efforts for the newly adopted Next Generation Science Standards for all K-12 education programs.

“I enjoyed being able to effect change in policies surrounding education,” Burks said. “You don’t often find people of Color in leadership within policy spaces. It’s important for policy changes to match the needs of everyone.”

At the urging and mentorship of her doctoral advisor, Burks made her first foray into higher education as a Founding Director of Secondary Science for a new Master of Education in Educational Equity graduate degree program at the University of Arkansas. The program was created to increase educational equity by preparing and supporting K-12 teacher leaders in under-resourced districts.

The Road Back Home

She set her sights on UHD.

“UHD encompassed everything I was looking for,” she said. “I wanted to be back home in Texas, but I didn’t want to give up working within a diverse culture space. This is my first teaching position where most of the students come from communities of Color. It’s very powerful.”

Since joining the University almost a year ago, Burks and a fellow faculty member are now developing a new master’s degree in Educational Leadership for K-12 school leaders to be certified in Texas. This semester, Burks taught “School Law & Ethics” and last fall, “Family, School & Community Engagement.”

“What’s exciting for me is that I’m not losing sight of working in policy and bettering K-12 systems,” she added. “Instead, I have the opportunity to do even more at UHD. At the University, my job is 50 percent teaching, which is where my heart is, 25 percent service to the community, and 25 percent research. How many times do you see job descriptions with such a relevant component as community service?”

College of Public Service (CPS) Dean Jonathan Schwartz is glad to have Burks as member of the CPS Family. “We are thrilled to have Dr. Lizette Burks on our faculty. In addition to leading the development of our Educational Leadership Certificate and Program, Dr. Burks’ research and passion for making learning more equitable for students from historically under-resourced communities is a great addition to our faculty,” he said.

Recently, Burks was selected as one of 12 committee members for the inaugural National Board on Professional Teaching Standards (NBPTS) Diversity, Equity and Inclusion Standards Committee to develop the first set of diversity, equity, and inclusion (DEI) standards for NBPTS that will be implemented into K-12 areas to certify teachers nationally. She was also asked to co-chair the committee to review public comments on these standards. In July, she will co-present the completed standards to NBPTS Certification Council and to the NBPTS Board of Directors in August.

“What originally drew me to this opportunity is that it comes back to policy,” Burks said. “I’ve seen a lot of DEI ramp up after the public murder of George Floyd, and the continuous headlines of Black men being murdered publicly has been an impetus for DEI and NBPTS’ work in education spaces.”

“The standards we are writing encompass all areas of teaching,” she emphasized. “These standards are not superficial … they delve deeper into self-growth for teachers. DEI work is not an action item you check off and say, ‘I did this.’ It’s about understanding your real identity, reckoning what your reality is and the reality of other communities you don’t belong to. Once you figure out what that looks like, you become more culturally competent to help all communities thrive.”

Burks also shares personal and professional experiences with her students to encourage them to be mindful of the spaces they choose to be a part of.

And being a part of UHD is the perfect space for her.