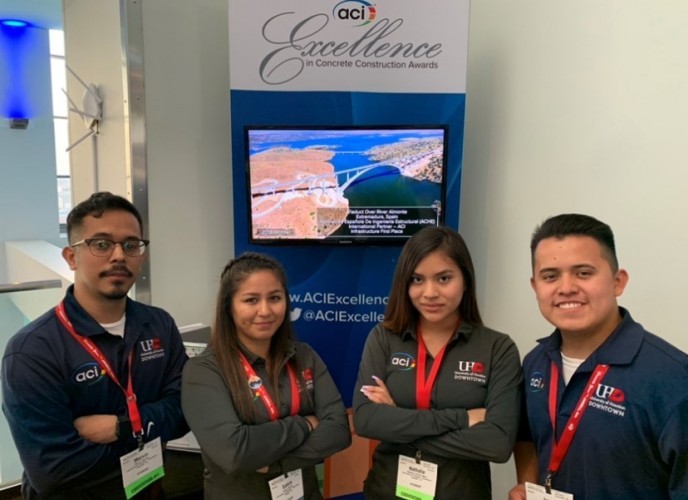 The students involved in the University of Houston-Downtown chapter of the American Concrete Institute (ACI) are literally “outstanding” in their field.

And they have the award to prove it.

UHD was honored as an ACI Outstanding University at the organization’s Virtual Concrete Convention recently. The UHD Gator group was among 66 other universities nationwide and internationally earning elite status for their research and participation in concrete and engineering related projects.

“It always makes me proud to see our students succeed,” said Dr. Arash Rahmatian, UHD Associate Professor and Program Coordinator of Engineering Technology. “Many of our alumni in our program have taken what they’ve learned and become successful as part of the growing workforce in the engineering industry.”

Since 2017, UHD’s team of students have been ranked among the top 10 universities nationally and have earned ACI’s “Excellent University” award.

“This most recent award was very exciting,” said Nathalie Sapon, UHD ACI Chapter Vice President. “It has definitely been a journey this past year with the pandemic, but it did not stop us from adjusting to circumstance and prospering.”

In achieving their outstanding rating, UHD students were extremely active participants in meetings, webinars, volunteer work, and participating in the fall and spring virtual ACI conventions.

One of the highlights of the past year was a community service project where UHD’s ACI students were able to help create an American Disabilities Act (ADA) certified sidewalk project at Null Elementary School in the Houston Independent School District. The students dug trenches for the sidewalk, placed the form work and mixed and poured the concrete for the walkway.

“Our main focus has definitely been staying continuously active,” said Marvin Mendez, President of the UHD ACI Chapter. “We’ve been constantly networking with others and we have participated in several webinars where we were able to interact with students around the world and working professionals in the field of concrete.”

As for what’s next for these students, many of them are toward their ACI certifications before graduating with their degrees in Engineering Technology and other majors, while also serving on ACI local and national committees and actively promoting UHD’s program.

“This year, we have been participating in social media events with engineering and non-engineering organizations in order to increase interest in our programs,” Mendez said. “We also want incoming students to know what organizations are available for them in the engineering field.”

After being an active part of the program, Rahmatian’s former students have landed careers as project engineers and managers, bridge designers, cost estimators and structural integrity engineers.

“Our students can get certified and involved with internships and permanent jobs quickly in this rich industry,” he said. “With the extensive interest in the construction of concrete structures, it makes this high-demand industry strong and resilient in any fluctuating economic market."