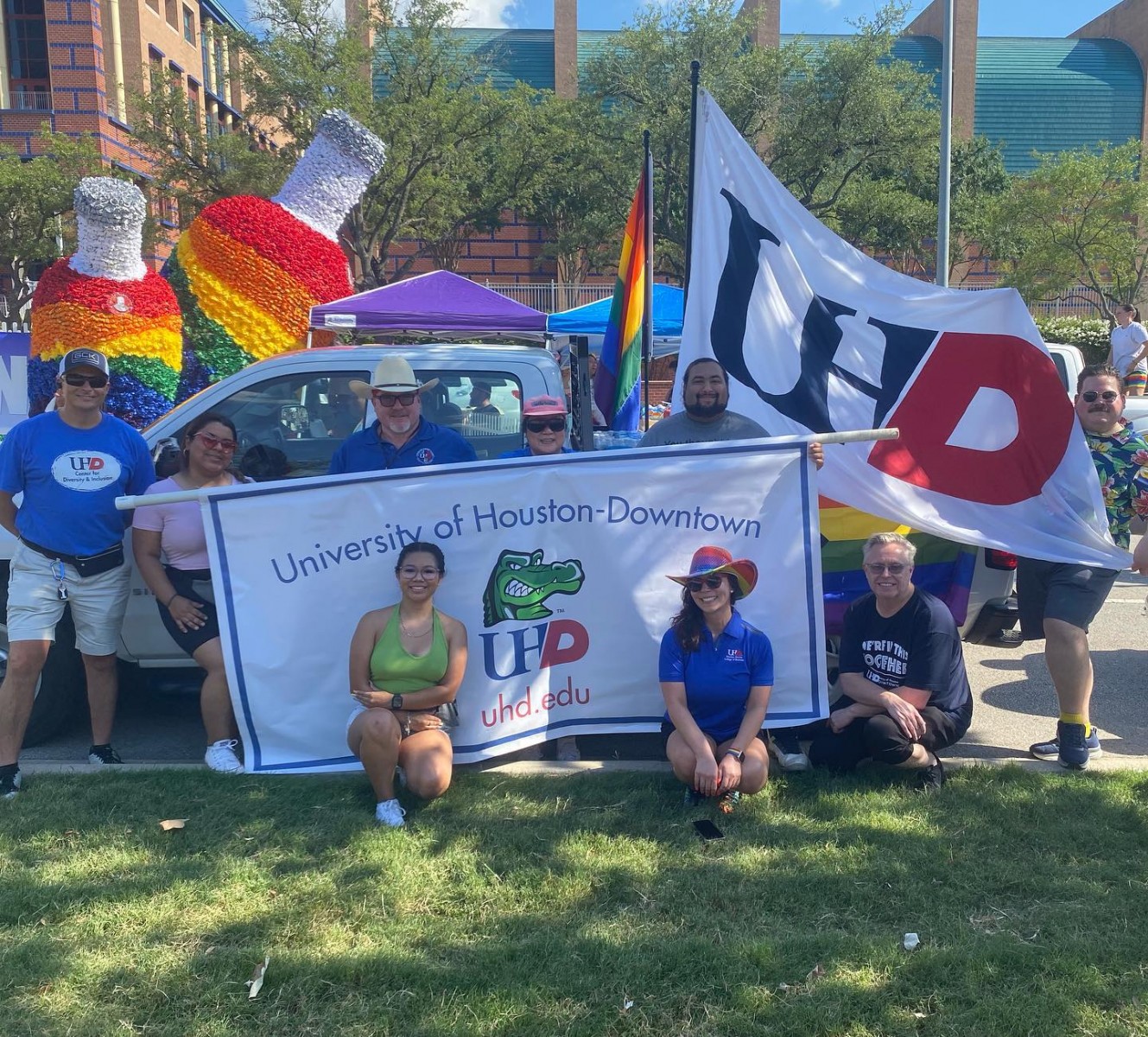 The University of Houston-Downtown Community made its presence known at the Houston Pride Parade on Saturday, June 25. The 44th Annual Official Houston Pride LGBT+ Celebration® was once again a live event after a two-year hiatus due to the pandemic.

UHD’s Center for Diversity & Inclusion, Student Affairs, and other departments, students, and faculty walked in the parade alongside a University vehicle proudly displaying the UHD banner.

“Our reception as the UHD banner entered the parade route with the giant UHD flag waving from the back of a UHD Facilities truck was incredible,” said Dr. John Hudson, Director of UHD’s Center for Diversity & Inclusion. “Chants of ‘that’s my school’ and ‘go Gators’ could be heard as we made our way down the route. Hearing people cheer and claim us as their school – and doing so proudly – was incredibly gratifying.”

The celebration kicked off outside Houston City Hall with a festival, followed by the parade. The events are organized by Pride Houston 365 (formerly Pride Houston), a nonprofit that works to celebrate Houston’s LGBTQIA+ community, raise critical funds for youth scholarships, and offer ongoing health and wellness education.

Hudson said the University’s participation in the parade-related events, including UHD volunteers hosting a tent at the event, was monumental in terms of visibility and representation.

“We made a clear statement that we are a welcoming, inclusive institution, and that we have a place for all as we celebrated Houston’s first Pride Parade since the pandemic began,” he said.

Hudson added that UHD will continue to be visible in the Pride events for years to come.

“This was only the beginning,” he said. “Next year, I would expect us to have two to three spaces in the parade, a UHD van or bus, a UHD float, and 100 or more marchers. We are the University of Houston-Downtown, and we all felt like we made a powerful statement as we made our way through the parade route.”

Work On Campus!
Sales Tax Holiday Weekend Aug. 5-7
UHD In A Minute: July 28
Marilyn Davies College of Business Hosts Power On Heels Event
Taking It To The Streets: UHD Fuels Up For Gator Roadshow
UHD AMA Chapter Named Student Organization Of The Year
Some modules are disabled because cookies are declined. Accept cookies to experience the full functionality of this page.
ACCEPT COOKIES
We use cookies to optimize the website, no personal information is stored. Learn more
DECLINE COOKIES ACCEPT COOKIES