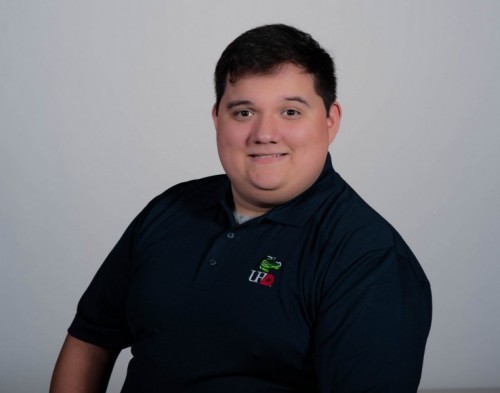 Ricky Rodriguez was a promising star on the gridiron, but an injury placed him on the sidelines. With support and encouragement from friends and staff members at the University of Houston-Downtown, Rodriguez found success on a different type of field.

Rodriguez is one of the leading student advocates for UHD’s pioneering Esports Program. In fact, he was among the founders of the Esports Center located near Student Activities on the second floor of the One Main Building

Presently, Rodriguez is serving as a Student Assistant at the Esports Center and has promoted the program to students, faculty and staff. He also has been featured on local news outlets, including FOX26, promoting UHD’s program.

In December, Rodriguez will walk the stage at UHD’s 71st Commencement on December 18 and receive his bachelor’s degree in Health and Behavioral Science.

Gator Update interviewed Rodriguez to get his thoughts on the Esports Center as he passes the torch to future generations of Esports athletes.

Gator Update: What has your journey been like as a UHD student?

Ricky Rodriguez: I feel blessed, honestly. My time at UHD has been impactful and it started a new chapter in my life. After a rocky end to my high school years with an injury, UHD gave me the time and resources that I needed to ease into a new chapter of my life.

Gator Update: Who has helped you and provided encouragement?

Rodriguez: Early in my freshman year, I had help from the UHD’s Office of Disability Services, which offered special accommodations for my classes. I was provided extra time and quiet places to study, so I felt UHD was the perfect environment to get back into my groove and come back 100 percent. The University also provided me with opportunities to grow and find my place on campus. Choosing UHD was the best decision I made for my career. In the future, I hope to work for UHD within this department I helped create to make it a better place for students.

Gator Update: How long have you been working for UHD Esports?

Rodriguez: It has been four years so far since I was on the planning committee that laid the groundwork for the program and the room’s building.

Gator Update: Which teams do you manage for the UHD Esports?

Rodriguez: As of this semester, I manage the FIFA team and the League of Legends teams.

Gator Update: How do you feel about working in the UHD Esports Center?

Rodriguez: It’s been a dream come true, working with video games, making a name for my university and helping young aspiring Esports stars find their start at UHD.

Gator Update: What are your thoughts on the Esports teams here at UHD?

Rodriguez: They’re great. All the teams are student-driven, and the students have the grit and passion for creating teams and representing the university when competing at a national level. I couldn't be prouder.

Gator Update: Do you think Esports has had an impact on students at UHD?

Rodriguez: Yes, I do. There have been many instances that the Esports program was a deciding factor for students to come to UHD. Whether using the program to find friends or lasting relationships to improve retention rates and grades, the program has had a tremendous impact that can only grow with time. I believe that the Esports Center has played an essential role in students’ lives.

Gator Update: What are your plans after you graduate from UHD?

Rodriguez: After I graduate this December, I hope to return to the Esports program and become one of the people who work with the teams to get venues, tournaments, and other championships to make a greater name for UHD. Even though we are doing great right now, I want to help make our program better than ever, for the students that attend UHD now and in the future.