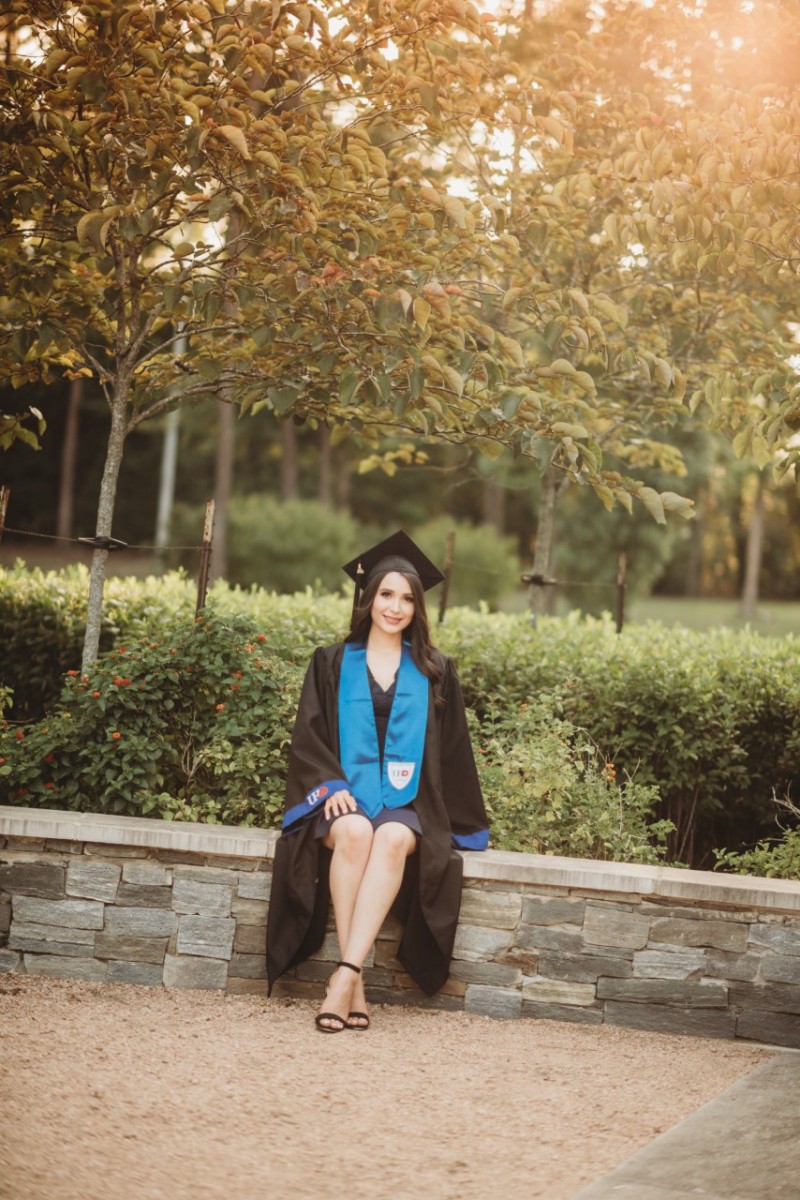 As Elena Garcia begins the final countdown to graduation — a day she's been dreaming of since her acceptance to the University of Houston-Downtown — she reflects upon what made this journey happen.

It started a few years ago. The Bachelor of Education graduate was pregnant with her second daughter, but she was still determined to finish her degree after completing her prerequisites at Lone Star College.

"Many of my Lone Star College teachers who were mentors mentioned that UHD had an excellent system for professional development and rigorous training, which the University was known for. The lesson plan template was challenging, but it would help me a lot," Garcia explained.

She remembers being so excited after getting accepted that she would stop and check for confirmation emails for her UHD summer schedule between contractions while in the hospital.

Choosing UHD was an easy choice for Garcia, who was eager to follow her passion for helping others. She knew she wanted a path in Education, so she pursued it. Plus, UHD was close to home, which was essential for her as a full-time student, wife and mother to two young girls.

Garcia admits that many days were challenging and she wanted to give up several times. At one point, she was taking care of a toddler and breastfeeding as she juggled classes and coursework.

Taking on school and the roles of wife and mother became even more challenging when COVID-19 arrived. Nearly every day, she found herself switching back and forth between her lesson plans and her daughters' online school classes - a feat she never imagined tackling.

Garcia is grateful for her professors at UHD, who she said were compassionate and understanding especially when making the switch from in-person learning to remote learning was difficult with children at home, especially when it came to completing her assignments. When she needed to record a video at home for her professional development class, she asked if she could use her daughter, to which her professor agreed.

"I asked my professor if I could use my daughter because she's at home with me and I feel like I could work with her, and she said, 'yeah, you can use her.' So I fixed one of the rooms in our house, and I put up a board, books and I made it seem like it was a classroom," Garcia said. "I enjoyed that, and it helped me realize it's okay. You can make it work anywhere. It doesn't matter if you're at school or home. You know you can make it happen. So that was a good memory that I took in with me."

Garcia credits the support she received from her professors as one of the biggest reasons for her success. When she needed to pump breast milk, her professors accommodated; when the workload got overwhelming, they gave her grace.

"You hear all these things like, 'once you get to college, they're not going to have any mercy on you,' but it's not like that at UHD. Professors are human, just like us. They go through the same problems we do, which really hit me, like wow, I'm not on my own," she said.

Just as educators, mentors and her family have helped her rise to the top, Garcia is hopeful of doing the same for others through teaching. Her passion for education started at a young age, and it was personal. She was raised in a Spanish-speaking home and wouldn't start learning English until her older sisters, who were in grade school, came home speaking it one day. This would also help her when she began elementary school, but the road was still tough.

"I remember I wanted to make friends, but I was afraid to speak English," she said. "I understood what they were saying, but I remember thinking, 'they're going to make fun of me.'"

And that's exactly what happened when she tried making friends with another girl on the bus in kindergarten. Garcia remembers it as a painful and crushing moment. But it didn't keep her from pushing forward. Garcia was eager to keep learning English to help others, which is why she chose to pursue a bachelor's degree in Education with a focus on Bilingual Studies.

"I know I'm not the only one that has experienced something like this, and I feel like as a leader and a teacher, I could make an impact in someone's world," Garcia said.

Reflecting on her own experiences, she is thrilled to begin making a difference for other Bilingual students. This year, she will start teaching fifth grade at Houston Independent School District's Ketelsen Elementary.

"It's not just about teaching," Garcia said. "Sometimes they want to be heard and need someone to talk to. I really enjoy talking to them and getting to know them. Sometimes they have questions because they need help and I want to make them feel comfortable when asking for help."

None of this would have been possible without the support of her family.

"It can be extra tough because you have to come home and balance and make time for your kids," Garcia said. "It can be very tough in the beginning. I almost quit so many times, especially as a parent. My advice is don't give up. Keep striving and working hard because, in the end, we're doing it for ourselves and our family."

"Everything I went through helped me become a better person," Garcia said. "I doubted myself a lot in the beginning. When I first arrived at UHD, I was quiet and shy, but now I feel stronger, more empowered and like a leader. I wasn't afraid to speak out and say what was on my mind and I know it was because of my experience at UHD."