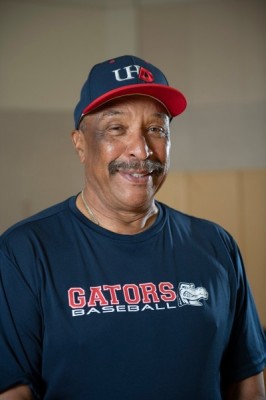 Fans young and old are inspired by this year’s World Series run by the Houston Astros.

As the American League Champs prepare to mount a comeback against Atlanta to bring back The Commissioners Trophy, a former Astro is on the University of Houston-Downtown campus motivating a new generation of ballplayers.

Icons such as the Astros’ Joe Morgan and the Cardinals’ Bob Gibson were among those who imparted advice upon him when he was coming up in the big leagues. Now, Spinks is doing the same for the Gators

“All I’m trying to do is to give them the inspiration and the will to go out there and play the game to the best of their abilities,” Spinks said.

Spinks is well aware of what it takes to win on the diamond. After graduating high school in 1966, the Chicago native attended junior college before being drafted by the Houston Astros. After honing his pitching talents in the minor leagues (including striking out 20 batters in a single game in the Northern League), Spinks played three seasons with the Astros before being traded to the St. Louis Cardinals. An injury, however, forced an early retirement from the sport.

Despite leaving the pitcher’s mound, Spinks remained close to baseball and served several teams as a talent scout. He also coached for various schools and served as a pitching teacher for high school students. One of his students, pitcher Josh Guerrero, recommended that he look into UHD’s baseball coaching position.

In his first year as the Gators’ skipper the team was off to a strong start. The season, however, was canceled due to COVID-19.

“I think we all were a bit let down that last season ended the way it did,” Spinks said. “But the safety of the players was very important, so it was the right thing to do. If anything, that short season showed our players that they were able to be competitive and beat some very good teams. Most of all, it showed that these students really wanted to play baseball.”

UHD’s Baseball program and all of its athletic teams participate in club sports competitions throughout the region. On the diamond, the Gators have proven formidable in recent years, earning the Rocky Lone Star Conference Championship in 2019.

Spinks and the Gators can be found practicing regularly at Houston’s Schwartz Park, which also serves as their home field. While the season doesn’t begin until February, the Gators will compete with club teams from across Texas and the U.S. during the Wood Wars Tournament Nov. 5 – 6 in Euless, Texas. The tourney will be the team’s first competitive outing since the pandemic squashed the 2020 season.

As UHD’s team prepares to face off against club teams from the University of Kansas, Baylor University and other institutions, Spinks also is keeping an eye on his former team as it tries to come back from a 3 – 2 game deficit in the World Series.

“My first win as an Astro was against the Braves,” he said. “I pitched nine innings in that game. In fact, Dusty Baker was there that day with the Braves, but he didn’t play. It’s really strange … it feels like it’s coming full circle for me to watch this series now.”

While Houstonians are indeed rooting for their home team, Spinks wants people to take note of his Gators. As a club team, he said, student players aren’t on athletic scholarships. They’re simply on the field for the same reason he was when he was their age.

“They’re here because they love the game,” he said. “This is a special group of players. I treat them like they’re my own kids, and they really respond to what I tell them. The only difference between this team and a Division 1 team is size. The talent and ability are there, and most importantly, the passion is there. They need someone to help guide them, and that’s why I’m here with UHD.”

UHD’s Baseball Program is among several University Club Sports teams offering students an opportunity to represent their school on the court or on the field. Other teams include Men’s and Women’s Soccer, Men’s and Women’s  Basketball, Women’s Volleyball, Cheerleading, Dance and Running. The newest addition to the University’s Club Sports is K-Pop.