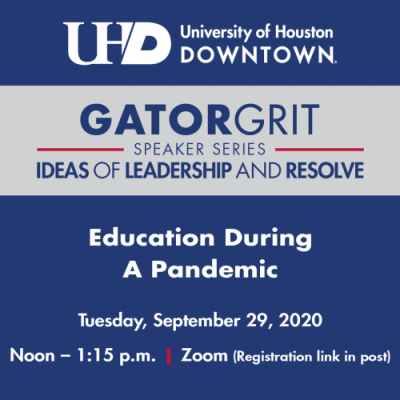 The University of Houston-Downtown’s Gator Grit Speaker Series continues to present conversations on issues facing our community. For Gator Grit’s first fall event, educators and education professionals will come together virtually to address “Education During a Pandemic.”

Panelists will discuss the challenges of K-12 education during the age of COVID. Guests will include a who’s who of teachers and administrators from area school districts.

This virtual event will be conducted on Zoom at noon, Sept. 29. It will be moderated by Dr. Laura Link, Associate Dean in the Department of Urban Education and Assistant Professor of Educational Leadership & Policy. Panelists include:

This event is open to the community and advance registration is encouraged.