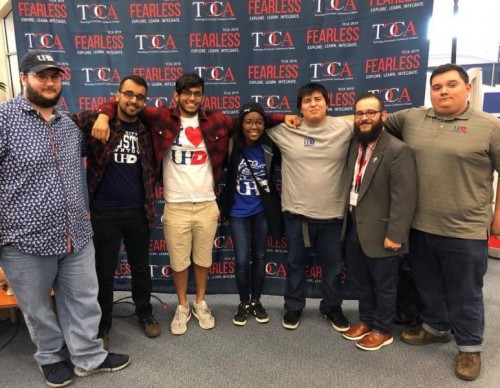 The University of Houston-Downtown Esports Center opened its doors to students in November 2018 and has served as a space where students can unwind and compete in amateur-level Esports gaming. As the popular hangout celebrates its third anniversary, UHD Student News reflects on the present and future of UHD Esports with Co-Founder and Assistant Director of Student Activities Jose Vazquez.

Q: What are your thoughts about the program at its three-year mark?

I’m amazed at what we’ve been able to accomplish. Our League of Legends team was competing at the Gold level and they won first place for the Summer Championship series through GG Leagues. Now, we have a Diamond team competing that has had great success and is competing until the end of November. Our new FIFA team is ranked No. 1 in the country in the Play Versus Championship they are in.

Q: What are your plans moving forward now that the UHD soft-opening is over?

Plans include getting people enrolled in the Esports teams so that we can get them into the competitions. One of the larger plans that we have is the new addition of the console room, which will be a separate room in the Student Activities Center that will house all of the consoles that we have in the Esports Center. The Esports Center used to be an open play space, where students could come and freely play whatever games they wanted open to close. However, once the console room is built, the Esports Center will be exclusively for PC gaming and you have to be on a team to participate instead of the usual 24/7 open play that students are used to. Instead, we will have different periods throughout the week where there is open play that is targeted towards bringing like-minded individuals together so that they can form their own teams for competition. However, you will see more teams reserving the Esports Center for practice.

Q: Can you tell us more about the new Consoles Room being built?

It’s going to house six screens with 24 different consoles since each screen is going to be paired with a Nintendo Switch, Xbox and  PlayStation. Students will also have the ability to plug-in their own console through an HDMI port on a wall plate. It’s going to have 18 consoles with the ability to increase to 24. This room will allow for our Smash Ultimate players to spread out instead of being in the Esports Center huddled around one monitor. Students can reserve this room for their own tournaments. It will be in the Student Activities Center so the console room will be open during times when the Center is open.

Q: What impact has Esports brought to our students at UHD?

First and foremost, it has given students a support structure. Students have told me that they have met other people who have the same interests and started scheduling classes and studying together. The Esports Center forms these academic clusters where students can form social connections with one another. This extends to our Esports teams as someone from the Overwatch team might reach out to someone in the League of Legends team and ask them to study with them in the library. The Esports Center creates a family network that brings together these like-minded individuals and helps them academically through this support system.

Q: What are your thoughts on the future of UHD Esports?

Based on what I’ve seen, our teams have doubled, so right now we have two teams for League of Legends and Valorant. FIFA has eight people, and there’s a Rocket League team coming soon. We’re trying to build communities around other games too such as Apex Legends, Fortnite, and Smash. We’re going to try to run some events like Consoles n’ Kicks to build these communities at UHD.