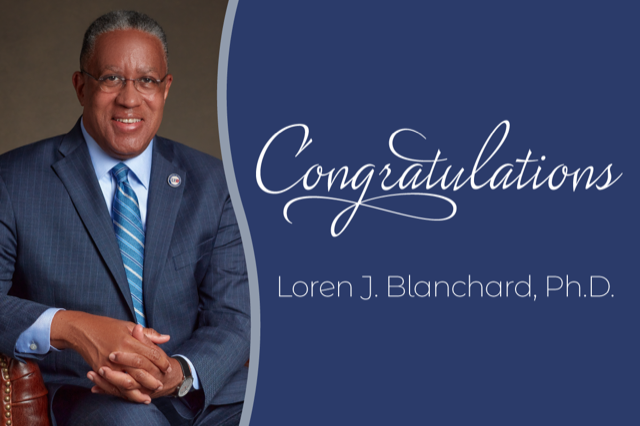 This month marks the one-year anniversary of President Blanchard’s joining the University of Houston-Downtown. Filled with milestones, the year is made even more impressive because the University reached these achievements under the constant pressure of a pandemic as well as expansions to programming and infrastructure.

The President spent his first 100 days studying the University from the inside out, learning from the Campus Community about four areas: where UHD is ascending and poised for growth, where it is overcoming barriers, where it is seeking opportunities, and where it can improve.

These actions ultimately forged a roadmap to the future for UHD, something President Blanchard refers to as the Institutional Compass that points the way to UHD’s Four Points of Excellence:

The most immediate of President Blanchard’s initial challenges was determining how best to provide an outstanding educational experience during the pandemic while maintaining a safe campus environment. He and his team implemented a variety of resources and best practices to support virtual learning, before the eventual return to in-person classes. The campus accommodated this return with touchless door entries, free hand sanitizer and masks, and the seven-days-a-week Curative testing kiosk next to the Jesse H. Jones Student Life Center.

The University also welcomed locally and nationally recognized leaders to keep the Campus Community up to date on COVID-19 developments, testing, and vaccinations. These efforts were complemented by working with community partners to supply vaccination clinics.

Another milestone was the launch of the President’s Lecture Series: Inclusive Excellence, The Way Forward. Each month, UHD welcomed guest lecturers and panel speakers — all luminaries in their fields — to address critical conversations related to justice, equity, and inclusion. Thanks to the ECMC Foundation, the meetings have been free and available to all who wish to make a further impact on our Campus and beyond. The quality of speakers who discussed these significant topics confirms UHD’s reputation as a leading force for change in the Houston educational arena.

Likewise, the University of Houston-Downtown has reached noteworthy fundraising benchmarks under President Blanchard. As one testament to the collaborative efforts the public and private sectors both play in the University’s continued success, the Houston Endowment granted the Department of Urban Education in the College of Public Service a $850,000 grant to increase the diverse K-12 teaching workforce in the greater Houston region, particularly in bilingual education. The gift is indicative of the variety of reinforcement that businesses, philanthropic organizations and individual donors provide to UHD knowing that their contributions will enhance our city and the lives of Houstonians at scale.

Physically, the campus is also charted for a rising course. The Student Wellness & Success Center is making major headway in its construction, and plans are being developed to enhance the Welcome Center Building.

President Blanchard has also served as an ambassador of the University of Houston-Downtown in higher education conferences and speaking panels, including the American Council on Education, the American Association of State Colleges and Universities, the National Forum for Black Public Administrators’ Houston Chapter, and the Texas Higher Education Leadership Conference. Most recently, he was recognized as one of the Top 50 Black Professionals and Entrepreneurs of Texas.

In addition, President Blanchard was selected as the 2022-23 Chair of the Houston Guided Pathway to Success (Houston GPS) program. Since its inception in 2015, the Houston GPS initiative has supported the academic ambitions of students throughout the region. Houston GPS has assembled Houston-area colleges and universities that work in concert to ensure students graduate on time, without excess credit hours, and with minimal debt — just another way President Blanchard is actively participating in efforts that can promote student success.

A review of the banner year shows President Blanchard’s significance and drive to demonstrate what so many Gators already know: UHD is a multifaceted, diverse, and inclusive Institution that is empowering all who enter its doors for future success and social mobility.

On behalf of the University of Houston-Downtown, we congratulate President Blanchard on his one year anniversary!