‘Books Unite Us. Censorship Divides Us.’

Since 1982, the last full week of September has been designated Banned Books Week, a time to promote intellectual freedom in libraries and schools by celebrating banned and challenged books.

This year’s theme—“Books Unite Us. Censorship Divides Us.”—supports the belief that all individuals have the right to express and access ideas and beliefs, regardless of whether those ideas and beliefs are popular or mainstream. The 2022 Banned Books Week artwork includes birds flying freely and caged, reminders of the intellectual freedom provided by having access to a spectrum of written works versus the limitations of censorship.

As part of an institution committed to equity, justice, and inclusion, UHD’s W.I. Dykes Library is celebrating Banned Books Week and the freedom to read. Librarygoers will see a series of tabletop posters placed throughout the library that spotlight recent news articles on censorship and book banning from respected news sources, including the Guardian, Texas Tribune, The Washington Post, Houston Public Media, CNN, and the American Civil Liberties Union (ACLU), among others. Each poster provides a QR code that leads to the article. 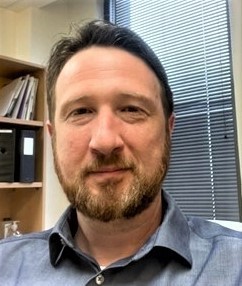 “We’re using the tabletop posters to provide more information around the topic of banned and challenged books to help students understand the debate around those titles and to explore the motivation behind a given censorship effort,” said Sam Weehunt (left), Reference Coordinator Librarian for the W.I. Dykes Library. “This week is a chance to raise awareness for students that the issue of censorship is a very real threat to their education.”

One of the library’s stated values is to support “an open, safe environment for curious minds to engage and discover without fear of judgment, empowering intellectual and academic freedom.” As such, the library holds a number of banned books in its collection. Many of the copies are being displayed on a table to provide immediate access for library visitors. 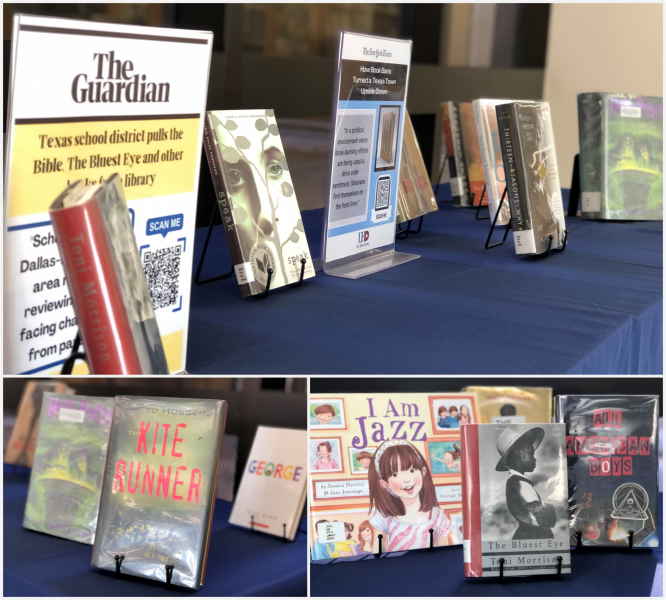 Weehunt urges campus community members to request any book missing from the library’s titles, noting, “We’re an academic institution charged with teaching students to think critically. Having access to books that represent a variety of viewpoints on controversial topics and discussing those viewpoints and topics in class is one way students learn that critical thinking skill.”

As Banned Books Week celebrates its 40th anniversary, challenges to books and attempts to ban them from schools, libraries, and bookstores are accelerating, according to the nonprofit American Library Association (ALA). The ALA’s Office for Intellectual Freedom (OIF) began cataloguing reported censorship attempts two decades ago. The OIF website states the group “tracked 729 challenges to library, school, and university materials and services in 2021, resulting in more than 1,597 individual book challenges or removals”—a record high. (Most challenges include more than one item.) This year’s challenges are on track to beat that record. In Texas alone, the Houston Chronicle uncovered more than 1,700 reviews, challenges, and bans of books during the 2021-22 school year—most instigated by politicians. The ALA considers challenges and bans to be significantly underreported.

Historically, many challenged or banned books were called out for profanity and sexually explicit content. In the past few years, most of the books under fire feature racial and gender themes, which have become lightning rods for political groups. Librarians as well as school and university administrators are often caught in the crossfire. According to Deborah Caldwell-Stone, Director of the ALA’s Office for Intellectual Freedom, “This is a dangerous time for readers and the public servants who provide access to reading materials. Readers, particularly students, are losing access to critical information, and librarians and teachers are under attack for doing their jobs.”

Weehunt feels Banned Books Week is a chance to spotlight the issue of censorship in a way that reframes it: “My hope is that we make it clear to our students and community that free expression and free dissemination of different kinds of ideas strengthen our democracy rather than weakening it.”

To talk with a librarian at W.I. Dykes Library, stop by the 5th floor of the One Main Building or visit the library’s webpage, where you can chat with a librarian 24 hours a day, seven days a week.

The University of Houston-Downtown (UHD) is the second-largest university in Houston and has served the educational needs of the nation’s fourth-largest city since 1974.

UHD has the most affordable tuition among four-year universities in Houston and one of the lowest in Texas. U.S. News ranked the University among Top Performers on Social Mobility and awarded UHD a No. 1 ranking as the most diverse institution of higher education in the southern region of the U.S. The University is noted nationally as a Hispanic-Serving Institution, Minority-Serving Institution, and Military Friendly School. For more on the University of Houston-Downtown, visit www.uhd.edu.

‘Books Unite Us. Censorship Divides Us.’

UHD In a Minute: Hispanic Heritage Month Edition
Sept. 28 Is an Important Day at UHD!
Latinas Achieve! Call for Participants! Deadline Sept. 30
UHD Club Sports Fall Roundup
You Are Not Alone Interactive Workshop Sept. 22
The Fall Community Partners Fair Is Here!
Some modules are disabled because cookies are declined. Accept cookies to experience the full functionality of this page.
ACCEPT COOKIES
We use cookies to optimize the website, no personal information is stored. Learn more
DECLINE COOKIES ACCEPT COOKIES